People who experience a burn out may find it difficult to perceive. Yet, Bénédicte Costedoat-Lamarque, who herself went through a burn-out period, believes that we can turn this episode into a positive experience. On the condition that we examine ourselves in depth.

“Not me, it’s not possible”, “I’m just a little overloaded, it’ll pass”… Like many people, Bénédicte Costedoat-Lamarque was first in denial about the burn out that was luring her. A few months before she collapsed, evidence could have alerted her, but she ignored the signals her body was sending her… until the day she couldn’t walk anymore. “I was a dynamic mom, and I found myself moving around like a granny, having to get help from my kids to climb a little hill,” she recalls. She, who was living in a large group at the time, was losing meaning in her work. Today, she has succeeded in overcoming this ordeal of life and transforming it in a positive way. She details her journey and the levers that helped her in Le Burn Out, une opportunité de transformation intérieure (éditions L’Harmattan).

Misconceptions about burn out

First of all, it is necessary to realize that you are going through a burn out. But many false beliefs prevent us from grasping it, such as suggesting that burn out is temporary fatigue stroke: Physical exhaustion is associated with emotional exhaustion. The combination of the two, characteristic of burn out, induces a real inability to work. A time of great fatigue over a short period (a month for example) is not a burn out. It may be a preliminary phase. For burn out, the time is much longer,” she explains in her book. Thus, a vacation period is not enough to restore the person to burn out. We must also differentiate burn out from depression or psychiatric disorder. Burn out is a disease of strictly professional origin, the first symptoms of which are very physical,” reads the report. On the other hand, a poorly or not treated burn out can lead to psychological pathologies.

Finally, the one who has reconverted into coaching (individual and company), insists on the fact that the burn out is not a sign of weakness. The person, to face the demands of his job, shows a very (…too) important physical and psychological resistance and endurance, he goes beyond his limits, without listening to them, remaining over-invested. Despite what it looks like and its increasing level of fatigue, it shows a real inner strength,” she says. It is important to accept it, if we want to use this moment of life for useful purposes.

Manage to talk to those around you about burn out

Some signs of burn out can be spotted, but are unique to each: intense fatigue, strong emotional reactions, feelings of exhaustion, loss of meaning and sensations… So we have to start by accepting it in order to move forward. Yes, but how do you explain to a spouse or family that you no longer have the energy you need? How can we accept to flay the image we send back to our loved ones? Burn-out people often tend to feel guilty, because they are people who are very invested in their tasks. For my part, I was a driving force in the family organization, I couldn’t bring myself to rest all day,” she says.

One day, however, a click came from his entourage. Her youngest child, who was 12 years old at the time, felt she was suffering a great deal. He asked her: Mom, you always tell us that we have to express our emotions, because if we keep them inside, it does damage inside. I see you want to cry, so cry”. The tears have flowed. I believe that of all my entourage, they are the ones who adapted the most quickly. They felt, they understood. Of course I spotted some worried looks, but I also had their natural support. Children are little life guides, much more naturally connected to their feelings and to the essentials than we adults. It’s about listening to their seemingly innocuous remarks because it’s a relevant mirror,” she says.

Be accompanied so as not to suffer the burn out

However, the closest entourage can not be the only one to help the person burn out. External support is necessary in many respects. To begin with, the therapist, regardless of the method chosen, will have an emotional detachment that will allow him the necessary setback to help. A therapist or a coach will help the person to wonder about the modes of operation and habits that led him to this burn out. Moreover, it is important that the environment is also preserved so as not to be sucked by the inner chaos, so as not to damage itself too.

I see the burn out as an alarm signal of life. It’s like being on a road, being in full acceleration and taking a wall. You have to accept that you missed a fork,” Bénédicte says. Of course, this situation is extremely distressing, but we can take action to make it useful. An accompaniment will make it possible to reconnect to oneself, to one’s inner nature. But this psychological work must be accompanied by body work. In burn out, you are cut off from your body. It can mean walking or just being in nature, listening to your feelings and feelings. It’s oxygen for body and mind!” she says. In her book, she also talks about the benefits of meditation and evokes Tai Chi chuan, acupuncture… Each one has its own recipe.

Turning your burn out into a positive experience

This work then leads to profound reflections. I sincerely believe that life is intelligent, and that all the great events that constitute it, like a burn out, have an evolutionary goal. You can choose to go for it and go for it because you’re blinded by what’s going on. Or we can choose to transform it, by becoming aware of what is at work,” she says. Before any professional projection, we can ask ourselves what nourishes us and find his inner dream. For my part, I really wanted to write a book. As a chemist by training, I had always put up barriers, I did not feel legitimate. I had also often thought about starting my own business, without necessarily making the decision to start,” she says.

However, it reminds us that asking questions does not mean that we have to change everything. This is what she often tells the people she now accompanies, who come to see her in the prevention of a burn out or in the burn out phase: The grass is not greener elsewhere. The idea is not to say that the burn out must necessarily push us to change the box, no. I believe that burn-out should be used to challenge our ways of operating, to know what is right for us and what is less right for us. So I have the example of a person who managed to reinvent himself within his company, but the burn out allowed him to wonder about patterns that affected especially his family sphere. Work was only a trigger at the time,” she says. Combining personal experience and professional reflections, his book could help more than one in this moment of life that one often feels alone. 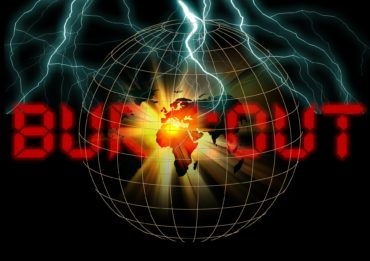 Worldwide burn out, behind the chaos, an opportunity…